The Difference between Next.js and React?

In this post, we take a look at the difference between Next.js and React and discover the pros and cons of each approach. 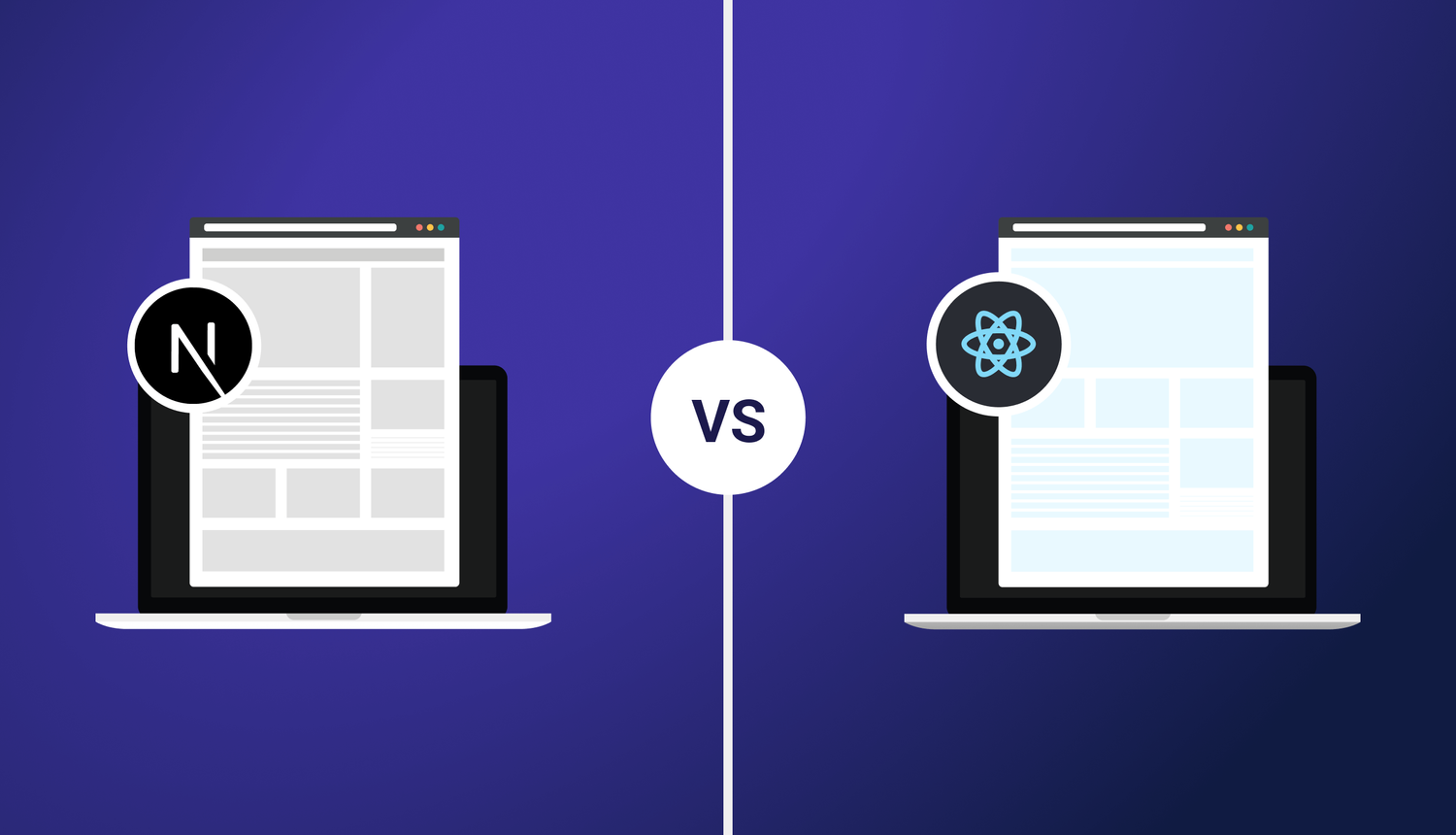 One of the first decisions a developer or CTO makes before starting a project is deciding which technology to utilize, as this is critical to the project's success. When choosing a software library or framework, what it's like for developers to complete a certain project (the developer experience) is usually taken into account.

Libraries or frameworks that are exciting and straightforward to use are frequently selected by developers. This is one of the primary reasons why some libraries and frameworks become so famous and extensively utilized by so many developers. As a result, React and Next.js have become two of the most popular front-end web development technologies today, responsible for shaping our online experience as the standard tools used to construct user interfaces.

In this blog post, we will examine these two technologies to understand what they do, their pros and cons, the key differences between them, and then explore their use cases, so you can eventually decide which one to utilize for your projects.

A Brief Introduction to Next.jsAnchor

Next.js is a framework created by Vercel (formerly Zeit). It is open-source, built using Node.js and Babel, and connects with React to create single-page apps. This allows you to create static web apps and makes server-side rendering incredibly simple, regardless of where your data comes from.

It is a React framework, which means it works on top of React.js or it makes use of the many popular React library’s capabilities to quickly construct software applications. It has a lot of important features, such as a preview mode, building size optimization, static export, and pre-rendering.

Next.js has two types of pre-rendering to manage how data is fetched for optimal speed, these are:

You can read more on Server-side Rendering (SSR) and Static-site Generation (SSG) here.

Overall, the current version of Next.js is something that React has long lacked, as it is largely focused on integration and performance. It also includes a Rust compiler for quicker builds, improved image management, increased SEO crawlability functions, and operational tools to make it even more production-friendly.

A Brief Introduction to ReactAnchor

React is a free and open-source JavaScript front-end library for creating user interfaces. Meta (formerly Facebook) and a community of individual developers and organizations manage it. It became open-source in 2013 and is now one of the most used front-end libraries.

According to the 2021 Stack Overflow developer survey, React.js surpassed jQuery as the most frequently used web framework with around 40.14 percent and the most sought, with one in every four developers desiring it. Over, 8000 industry leaders utilize React.

Among the many important capabilities given by React are routing and state management methods with Redux (for enterprise-grade mobile apps) and other libraries/frameworks such as React Native. React Hooks is another React-based utility that is frequently used to handle component behavior and logic.

React includes a range of extensions for overall application architectural support, such as Flux and React Native, in addition to UI. It provides a unique extension that accelerates and simplifies the debugging of React web projects in practically all browsers. Its main rivals are Angular and Vue.js, although according to npm trends, it has been the most popular library of the three in recent years.

Key Differences Between Next.js and ReactAnchor

It is critical to distinguish between a framework and a library, as we previously stated that Next.js is a React framework (as it calls itself "The React Framework for Production"), and React is a JavaScript library.

Libraries are collections of resources that developers may utilize to streamline the application development process. Libraries may be quite useful while working on complex projects since they allow you to utilize different applications, even if they are unrelated in any manner.

Next.js is used to create landing pages, SEO-friendly websites, eCommerce businesses, and other web applications that require rapid, high-performance load times. Twitch.tv, TikTok, Hulu, Binance, and many more websites and platforms that involve many people interacting with complicated data influxes are some of the most amazing instances of Next.js in action.

You can check out hundreds of beautiful websites built with Next.js by Vercel here.

Hygraph is a GraphQL-based headless CMS that works well with Next.js apps and webpages. All you have to do to get started with Hygraph is to create an account, select a plan and then create a project. This will provide us with an API that we can query with GraphQL. GraphQL is a query language that allows you to get exactly what you want from many resources in a single request.

Querying resources and data using GraphQL is very simple and could look like this:

You can check some querries commands and how they work with GraphQL here.

Hygraph has a robust and versatile administration API for managing your content and schema, as well as a lightning-fast content API. Combine the power of Next.js with a headless CMS for your Progressive Web Software, eCommerce store, or desktop app project.

React is used to build SEO-friendly dynamic webpages, mobile apps, single-page apps, dashboards, and visualization tools. It is used to develop some of the most well-known platforms and services we use every day, like Facebook, Netflix, BBC.com, and Airbnb.

You can check out hundreds of beautiful websites made with React here.

Making use of GraphQL in your React app would need you to first install Apollo Client, this will help you configure Apollo Client and then allow you to retrieve data from graphQL and REST endpoints. To work with React in Hygraph you can make use of the React SDK.

This example shows how to query from Hygraph using graphql-request in React.js. You can also read this tutorial on how to work with React.js and why a React Headless CMS with GraphQL would be the best choice for your next project.

How to Pick the Right One for Your ProjectAnchor

This should not be the issue because there is no conclusive answer as to which is superior, but rather it depends. It all boils down to the type and aims of the project, whether you're operating as a developer or a CTO.

In their ways, both React and Next.js present excellent options for developers. React allows you to construct things exactly as you want them to be and is backed by a large community. Next.js makes your life simpler by providing several tools and standards out of the box, and it is also backed by a thriving open source community. They're simple to get started with and easy to obtain support with, whether through documentation or community resources.

React is a wonderful complement to any project. What's more, if, given the chance, it can scale as well. React is more adaptable than Next.js simply because it is a library. It is up to the engineer to decide whether to implement it.

We hope the contrasts and explanations offered here help you understand how to utilize them in your projects and which one to use based on the project.

Site architecture of an e-learning platform

In this article, you’ll learn more about e-learning and its advantages, as well as the technical architectures of e-learning systems and the essential system...

MACH architecture: what is it, and why do you need it

This article explains the key features of MACH architecture and gives an example of how it can benefit your business.

Let's take a look at the key characteristics of a modern data platform, which include simplicity, adaptability, and security.