Vue.js vs React - How to Choose the Right Framework

In this article, we will compare two excellent JavaScript frameworks, their pros, and cons, as well as some use cases built with each of them. We'll also look at how to choose the best one for your next project. 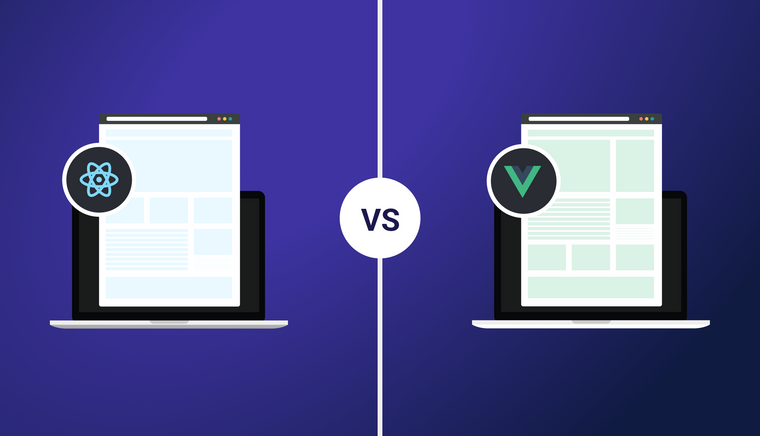 Front-end development is one of the most dynamic areas of software development. So much so that it can be difficult to keep up with all of its new trends and tools. Vue and React are two of the most popular frontend frameworks right now, and for good reason: they both provide a great developer experience, performance, and a large ecosystem to help you with your development efforts.

Vue.js is a progressive JavaScript framework for creating UIs (User Interfaces) and SPAs (Single-page Applications). This framework is well-known for its short learning curve, which is made possible by the use of Option API, which allows beginners to learn more quickly, making the framework's short learning curve something of a trademark.

Evan You, who previously worked at Google on some interesting and experimental projects centered on interactivity, created vue.js as a way to take the best parts of Angular and build a custom tool around it.

The latest version of Vue which is Vue3 is faster and lighter than previous versions and comes with improved TypeScript support and so many other features like the composition API, global mounting/configuration API change and lots more.

React is an open-source JavaScript library for creating user interfaces. It is a component-based frontend library that is only responsible for the application's view layer, which is the 'V' in MVC.

A React application is made up of several components, each of which is in charge of rendering a small, reusable piece of HTML. Components can be nested within other components to create complex applications from simple building blocks. A component may also keep an internal state – for example, a BlogPostList component may keep a variable that corresponds to the currently open blog post.

React employs a declarative paradigm that facilitates reasoning about your application and strives to be both efficient and flexible. It creates simple views for each state of your application, and when your data changes, React will efficiently update and render the appropriate component. The declarative view improves the predictability and debugging ability of your code.

Routing and state management methods (with Redux) and other libraries/frameworks such as React Native are among the many important capabilities provided by React. React Hooks is another React-based utility frequently used to handle component behavior and logic. In addition to UI, React includes several extensions for overall application architectural support, such as Flux and React Native. Its main competitors are Angular and Vue.js, though npm trends show that it has been the most popular library of the three in recent years.

Key Similarities Between Vue.js and ReactAnchor

Before we get into the differences, it's worth noting that they both have some key similarities that you've probably noticed while reading this comparison article, namely:

This is one of the most significant similarities between the two libraries. In JavaScript, the Virtual DOM is essentially a DOM tree representation. It is an HTML DOM abstraction in which every HTML element is a JavaScript object. This method improves performance and allows for more declarative DOM manipulation.

Both are lightweight, have a component-based architecture, and expose lifecycle methods. Because their performance is so similar, the differences are too minor to discuss. Vue, on the other hand, is lighter than React and renders data faster.

Both React and Vue have active communities as well as a plethora of libraries and tools. They are also open source and free. React, on the other hand, maintains its lead.

Key Differences Between Vue.js and ReactAnchor

The main distinction between Vue and React is how they approach application design. While React focuses on creating reusable UI components, Vue takes a more comprehensive approach by providing developers with front-end tools. Vue's template syntax is simple HTML, making it simple to learn. In Vue we make use of less code than React because it eliminates the need for separate files for each component in your app.

Let’s now take a look at some particular differences:

Vue's popularity is rapidly growing, and many high-profile companies make use of it for their projects such as Adobe, Alibaba, GitLab, WizzAir, Netflix, and even NASA. Vue is one of the few JavaScript frameworks on the market that has reached this level of popularity.

Furthermore, as more developers choose to learn how to code with this powerful framework, its community has grown in parallel with its demand! You can also see a plethora of other projects built with vue.js here.

Facebook, Instagram, WhatsApp, PayPal, Yahoo!, Khan Academy, and even Barack Obama's website are among the companies that use React for their projects. As you can see, React has already established itself as the go-to solution for rapidly developing high-performance web apps. You can also look at a plethora of other React-based projects here.

Hygraph is a GraphQL-based headless CMS that works well with Vue.js and React apps. All you have to do to get started with Hygraph is to create an account, select a plan and then create a project. This will provide us with an API that we can query with GraphQL. GraphQL is a query language that allows you to get exactly what you want from many resources in a single request.

Querying resources and data using GraphQL is very simple and could look like this:

You can check some queries commands and how they work with GraphQL here.

How to Pick the Right One for Your ProjectAnchor

JavaScript's frameworks do not have a one-size-fits-all solution. In their ways, both React and Next.js present excellent options for developers. The first thing is that the developer must consider what your web app will do and which features are most important to its success.

Vue and React are similar tools that provide libraries and frameworks to developers for creating dynamic, fast-loading user interfaces. Vue, on the other hand, is a little simpler than React, so it may be easier to learn for new programmers. React, on the other hand, has a steeper learning curve and requires more practice before you can truly master it. Despite this, developers generally regard it as an excellent tool that is more flexible than Vue.

Assume your primary goal is to create reusable components. In that case, you'll probably want to use React because it supports JSX, which makes creating custom components a breeze. Not to mention that React already has a sizable community behind it!

We hope that the comparisons and explanations provided here assist you in understanding how to use them in your projects and which one to use depending on the project.

What is a Customer Data Platform (CDP)?

Customer Data Platform helps you get a 360-view of your customers and enables you to segment them to detail. Let's look deeper into what...